This Fresh Turmeric Golden Milk (or sunshine in a cup as I like to call it) is surprisingly quick and simple to make! It's naturally sweetened, full of anti-inflammatory goodness and contains a secret ingredient that adds a heavenly touch!

While Golden Milk and Turmeric Lattes have become all the rage in the western world, its easy to assume its a new-age trend. But, believe it or not, Golden Milk is an ancient medicinal drink derived from India. Traditionally called Haldi Ka Doodh and made with just hot milk and turmeric. It was used to remedy many minor ailments. Its also long been consumed as a preventative measure for overall health.

One of the best things about Golden Milk is that it's delicious both hot and cold! It makes for a refreshing, creamy sip on sunny spring days. But, it especially makes for the perfect cup of warm sunshine on cold, snowy days.

Cinnamon, Turmeric and Ginger are all warming spices. This means they heat the body and are beneficial to consume during the cooler seasons. A hot cup of this delicious dairy-free Golden Milk is perfect for those bitter or damp days, helping to warm us from the inside out!

These warming spices, along with the good fats in this golden milk, also offer a grounding effect. Eating grounding foods is especially beneficial during the seasons of change (spring and fall). Since we are in the ether/space and air elements during these seasons, its easier to get lost in the mind and other realms. For some, this can provoke anxiety, stress and depression. Grounding foods (and practices) help bring us back into our bodies; into the physical and into the present moment.

There's an herb for every system, every organ, every gland and every tissue of our body. Mother Nature has put medicine in our food.

Curcumin is the compound responsible for these powerful anti-inflammatory effects as well as turmeric's vibrant yellow-orange colour.

The word on this little compound's health benefits has spread like wildfire and for good reason! High doses of turmeric can provide relief for countless conditions including arthritis, toothaches, bruising and PMS symptoms (to name a few).

Although turmeric is known for its potent anti-inflammatory effects, it quietly boasts some pretty powerful antioxidant activity as well. The antioxidants present in turmeric are known to be protective against cancer, heart disease and degenerative neurological diseases.

Much like turmeric, ginger also offers natural medicinal power. We all know the old ginger ale remedy for a nauseous stomach. This is because ginger ale was originally made with real ginger. Unfortunately, that's not usually the case today. The good news is, it's easy to make your own remedies with fresh or ground ginger!

This powerful root is known as a carminative. This means its very effective in relieving nausea and motion sickness, as well as promoting healthy elimination. One great thing about ginger is that its safe to consume during pregnancy!

Another great thing about ginger is that it also adds even more anti-inflammatory power to this Golden Milk; thanks to some mighty compounds called gingerols!

We often only think of cinnamon as a yummy spice to add to autumn and holiday baked goods. However, cinnamon is another medicinal powerhouse. One extremely beneficial quality of cinnamon is that it is very effective at balancing blood sugar levels.

Cinnamon also has antibacterial effects and can aid in soothing gastrointestinal distress. In fact, cinnamon has an extensive list of ailments it has treated throughout both Eastern and Western history. It's a spice that has countless benefits and is great to consume during the cooler seasons to support the immune system and overall health.

If you've been wondering, cacao butter is the secret ingredient in this Golden Milk! When making it dairy-free, it adds some good fats, more grounding power and a deliciously subtle flavour that blends so nicely with the warming spices.

Although cacao butter is a saturated fat, its an extremely beneficial fat with loads of health-protecting qualities. For one, it contains certain plant sterols that inhibit the absorption of cholesterol, so it is actually beneficial for cholesterol levels!

Cacao butter also contains powerful flavonoids that are known to have the same effect as aspirin in preventing blood clot formation. Despite what the mainstream narrative says about saturated fats, it's important to look at how the whole food interacts with the body. And in the case of cacao butter, there is much more than just saturated fat present. The many other antioxidants and compounds make it a powerful superfood, beneficial to heart health and cholesterol.

Golden Milk is commonly sweetened with honey. Which if its raw and unpasteurized (and of course ethically sourced) offers some great benefits. Raw honey is full of beneficial enzymes, is a complete protein and is a great source of many vitamins and minerals.

If you are making this Golden Milk Vegan, I recommend using pure maple syrup. Maple syrup is an excellent source of the trace minerals manganese and zinc.

Now, you might be wondering why on earth would you add pepper to this sweetened twist on traditional Golden Milk. And my answer is simple, bioavailability! You see, it's quite hard for the body to absorb and distribute curcumin, but when consumed with our friend pepper its bioavailability increases by 2000%! And no, that third zero isn't a typo. Pretty amazing stuff, eh?

With all the benefits listed above, it's no surprise that Golden Milk and Turmeric Lattes have made appearances in many coffee shops and even on grocery store shelves (in instant powdered form). It's an exciting time in the health and wellness world, and while this is wonderful and very convenient, you really don't need to head out to your favourite coffee shop or spend big bucks to enjoy this dreamy, medicinal delight.

How to Make Golden Milk

Making Golden Milk is surprisingly easy and quick if you have the ingredients on hand. Plus, this recipe uses fresh turmeric rather than powdered, so all that anti-inflammatory goodness is in full force! (and not to worry, I also provide powdered turmeric and ginger measurements for those times when fresh is not available).

If you're making this Golden Milk with powdered ginger and turmeric, all you need to do is throw all the ingredients in a blender and blend until smooth (a few seconds).

If you're making this Golden Milk with Fresh ingredients, you will just need to peel and chop your ginger and turmeric before tossing in the blender. You'll want to use about 1-2 inches of fresh ginger and turmeric (or more or less depending on how strong you like each flavour).

Once the turmeric and ginger is peeled and chopped into small cubes, throw it all in the blender with the remaining ingredients and blend until smooth (30 seconds to a minute).

To enjoy cold, pour over ice.

To enjoy warm, heat in a small saucepan over medium-low for a few minutes. Stir often to prevent any sticking. Once steam begins to rise, remove from the heat and pour into your favourite mug!

If you try this Golden Milk recipe, let me know how it was by leaving a comment and/or a rating below! And make sure you're following along on Pinterest, Instagram and Facebook for more wildly nutritious recipes!

Sprinkle more cinnamon on top or add some coconut whipped cream for an extra special treat! 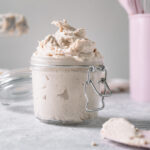 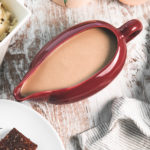 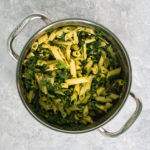 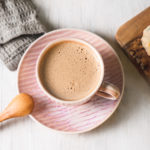 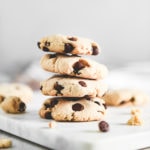